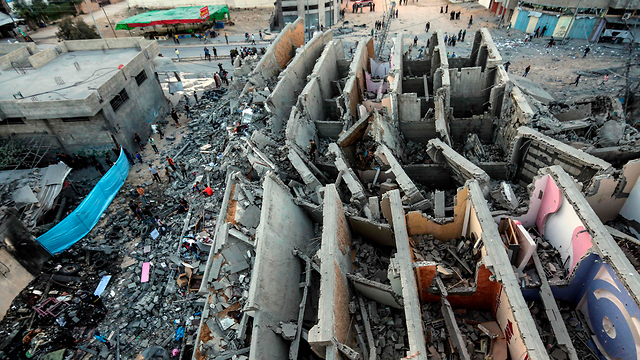 At the protest Tamimi called herself a freedom fighter and stated: "From the river, to the sea, Palestine will be free".

The event, which marks the 71st anniversary of the Nakba, or catastrophe, referring to the formation of the State of Israel, was organised by the Palestine Campaign with the support of Stop the War Coalition, Palestinian Forum in Britain, Friends of Al-Aqsa and the Muslim Association of Britain, as well as several trade unions and the Momentum faction of the British Labour Party.

The procession started in Portland Place and protesters marched through Oxford Circus and Trafalgar Square to reach Downing Street where the government offices are located. The 17 year-old Palestinian girl was jailed for eight months in late 2017 after she slapped an Israeli soldier in the face when a group of soldiers trespassed on her family's property - a short time after she had heard that the soldiers had shot her young cousin in the head.

Corbyn also castigated what he referred to as "the illegal occupation and settlement of Palestinian land" referring to "multiple human rights abuses faced by Palestinians on a daily basis".

Taking to the stage for a speech, Tamimi said she was a freedom fighter and refused to be defined as a victim. Efforts continue in the USA and Europe to suppress free speech by falsely labelling criticism of Israel as 'anti-Semitic'.

Tiger Woods sued over restaurant staffer's drunk driving death
The suit also says Woods and Herman drank with Immesberger a few nights before the fatal crash despite his struggle with alcohol. Woods snapped an 11-year major win drought by winning the Masters last month and seeks his 16th career major title this week.

Three Palestinian fishermen were detained by Israeli naval forces off the coast of Gaza Strip on Saturday, a local official said.

Labour Party leader Jeremy Corbyn supported the march on Twitter. For more than seven decades later houses are still being demolished, children are illegally detained and the people of Gaza have been under siege for 13 years.

"It is truly shameful that in these halls there have been almost 700 resolutions condemning actions of Israel, the region's only real democracy, yet not one condemning Hamas' attacks on Israelis or its abuse and neglect of the very people it claims to represent", said Greenblatt, who flew in from Washington to "reprimand" the UNSC meeting. As our audience increases - so do our costs. "We want them to lift the siege so we can work".