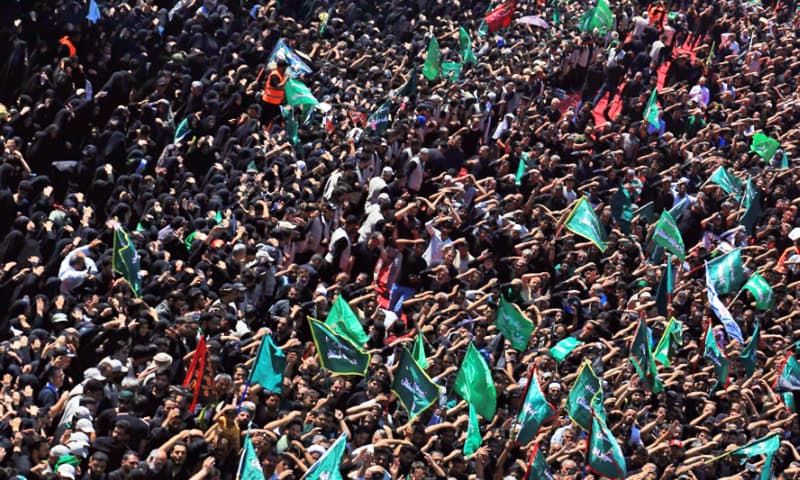 Hundreds of thousands of pilgrims from around the world swarmed Karbala on Tuesday. — AFP
Deanna Wagner | 11 September, 2019, 05:32

Iraqi Muslims take part in a mourning procession on the tenth day of the lunar month of Muharram which marks the day of Ashura, in the holy city of Karbala, on September 10, 2019.

The incident took place during the "Tweireej" run, when people run toward the Imam's shrine.

More than 30 pilgrims were killed and dozens injured Tuesday in a stampede at a major shrine in the Iraqi city of Karbala on the Shiite holy day of Ashura.

A Health Ministry spokesman said the preliminary death toll was expected to rise.

The urn returns: Australia claims the Ashes in tense conclusion
Stuart Broad and Jofra Archer have bowled well in his absence but England would have been a stronger side had Anderson been fit and firing.

The packed processions of black-clad worshippers made their way to his gold-domed shrine, carrying flags and crying out, "We sacrifice ourselves for you, Oh Hussein!"

Shia Muslims make the annual pilgrimage to commemorate the martyrdom of Prophet Muhammad's grandson Imam Husayn in the Battle of Karbala in the year 680 by the forces of Caliph Yazid. Hussein's killing has been attributed with cementing the schism between Shiite and Sunni Islam.

The processions usually occur under heightened security as in recent years they have been attacked by extremist militants from the Sunni movement.

The following year, 2005, during a different religious holiday, rumors of a suicide bomber caused a mass stampede on a Baghdad bridge crossing the Tigris River. Another official told the AP that there had been no collapse or crack in the walkway near the shrine. The run is said to symbolize when the maternal cousins of Imam Hussein's half-brother al-Abbas ran from a nearby village to rescue him, only to find out that he had been killed. Numerous faithful beat their chests and lashed themselves with chains in a symbolic expression of grief and regret for not being able to help Hussein before his martyrdom.