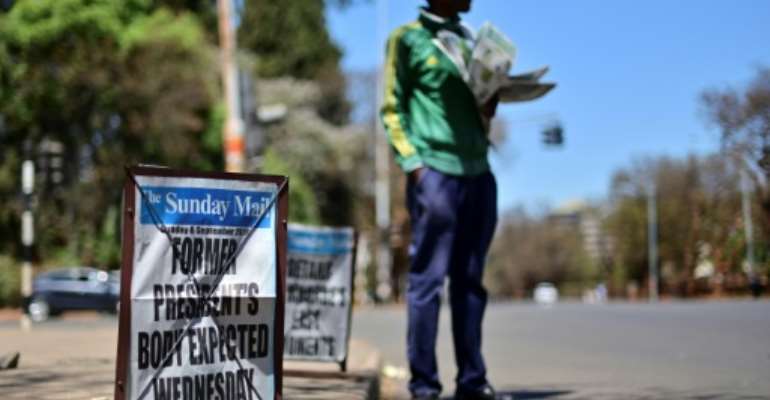 Former Zimbabwean president Robert Mugabe's body will lie in state at two different stadiums in the capital for three days before he is buried Sunday, the information minister said Monday.

But Mugabe is believed to have told his family that he wanted to be buried quietly with his mother, denying the politicians and generals who toppled him in 2017 the chance to "pontificate" over his dead body.

According to the memo, the Ministry of Foreign Affairs said a funeral service for Mugabe will be held on Saturday in the National Sports Stadium, before his burial on Sunday.

Revered by many as a liberator who freed his people from white minority rule, Mr Mugabe was vilified by others for wrecking one of Africa's most promising economies and ruthlessly crushing his opponents.

The location of the burial remains unclear, with Mugabe's family and President Emmerson Mnangagwa's government apparently at odds over whether it would be at his homestead northwest of Harare or at a shrine for liberation heroes in the capital.

The government has said it will send a high-powered delegation led by Vice President Kembo Mohadi to Singapore on Monday to help with the repatriation of Mugabe's body.

He ruled Zimbabwe for almost four decades until November 2017 when he resigned.

Reports indicate that he left instructions that he wished to be buried in Kutama, his rural village, and not at the National Heroes Acre in Harare where Zimbabwe buries its "national heroes".

In an interview with VOA's Zimbabwe Service, Gumbo, however gives credit to Mugabe for prioritizing education, and giving land to blacks, though he says the process was disorderly.

Mugabe's nephew and family spokesman Leo Mugabe said the decision has been left to elders and traditional chiefs in Mugabe's village of Kutama located about 100 kilometers northwest of Harare.

He also said that Mugabe died a bitter man after he was removed from power by force by the people he stood with at the toughest moment of his life. The chiefs have not told us where he will be buried, so it is not clear yet.

There Mugabe hoisted the new Zimbabwe flag and lit the independence flame on April 18, 1980 - bringing hope for a new era after a long guerrilla war.