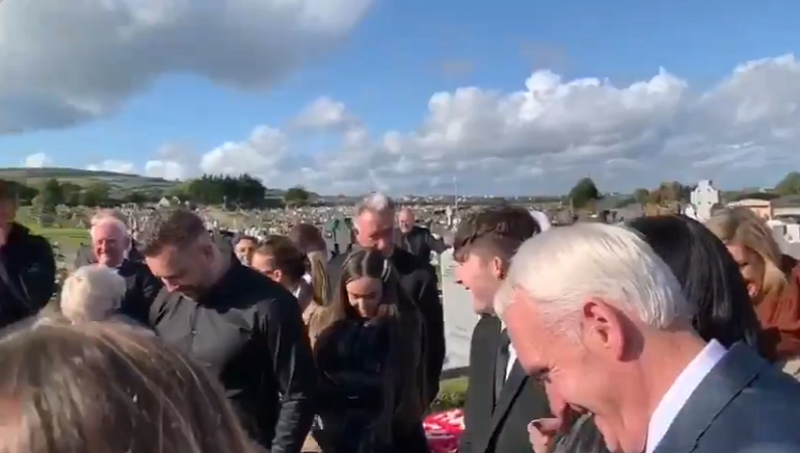 "Let me out, let me out", Bradley says in his pre-recorded message as the funeral-goers giggle, according to footage from the service.

Bradley, 62, died after suffering from a long illness and was buried in Dublin this week.

At his funeral, his friends and family wore black and stood around Bradley's grave, but then the unexpected happened.

This video was also shared by the Irish Defense Forces veterans' news as part of an explanation about the difference between military humour and civilian humour. His family called him a prankster. Mr Bradley can be heard saying as he appears to knock on the coffin walls. Let me out. I can hear you! Is that that priest I can hear?

Jimmy Neesham posts hilarious tweet after ICC changes Super Over rule
Former global umpire Simon Taufel had said that the umpires made a mistake while awarding six runs to England, instead of five. Neesham was about to become immortal in New Zealand's cricket history before a cruel rule changed everything.

Kiernan said: "It just made me happy, as that was him, so amusing and always making others laugh, he's such a bright character, he would be loving this right now".

Shay Bradley's daughter Andrea and her siblings granted his final wish by playing a recording of his voice coming from his coffin as it was lowered.

"Always the pranksters, ya got them good Poppabear, and gave us all a laugh just when we needed it!" she wrote. "I will love you forever", she captioned the video, along with the hashtag "shayslastlaugh".

Bradley pulled off the prank with his son Jonathan's help.

Shay's grandaughter Chloe Kiernan says that around a year ago he came up with the plan to go out with a laugh.

"What a man, to make us all laugh when we were incredibly sad", Andrea added on Twitter.

Man who raped about 200 children stabbed to death in prison

What is the Queen's Speech and what happens if MPs reject it?

Amazon now knows how to respond to Spanish, French and Hindi

Aim of New State Law Is to Let Kids Sleep

Fortnite Chapter 2: Everything We Know From the LEAKED Trailer!