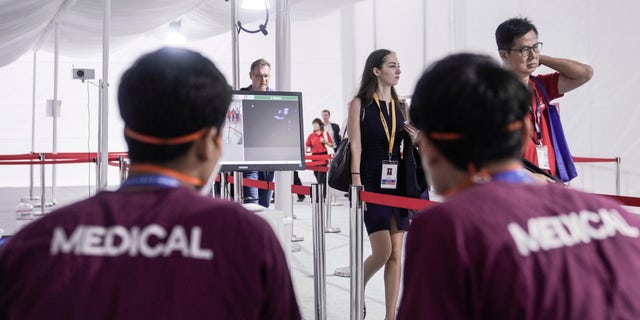 Visitors pass through a thermal scanner as they arrive the Singapore Air Show on Tuesday Feb. 11 2020 in Singapore
Ginger Lawrence | 14 February, 2020, 10:57

DBS has evacuated around 300 staff from its office at the Marina Bay Financial Centre in Singapore after it was confirmed that an employee has been infected with the coronavirus.

"In these hard times, we feel it is incumbent upon us as Singapore's largest bank to lend a helping hand to our clients and the public-at-large", said DBS Singapore country head Shee Tse Koon.

The bank said it was tracing potential contacts that the infected employee might have had with employees and other parties.

DBS has stated that they have activated business continuity plans, with employees working from home or from split sites, to ensure minimal disruption to operations. The affected office space, along with the common areas such as lifts, toilets are also being deep cleaned and disinfected in accordance with the Ministry of Health guidelines.

Staff are also being given a 'personal hygiene and protection Care Pack, ' including masks, a thermometer, hand sanitiser and vitamin C. The bank is aso rolling out webinars for medical health professionals to update employees on the latest developments on COVID-19 and to answer their medical concerns.

The Strokes confirm album release date and premiere new music video
Along with the song The Strokes released an animated clip, filmed by Mike Burakoff (who has previously worked with MGMT). Casablancas isn't one of rock's chattier frontpeople, but he ended the New Hampshire performance with a massive scoop.

DBS Group Holdings Ltd (星展銀行) said it expects the COVID-19 outbreak to hurt revenue slightly this year as it unveiled steps to alleviate its impact on small businesses and home owners.

In an internal memo issued by the bank, the staff were informed about the confirmed case.

Singapore has now reported 47 cases of the deadly coronavirus, becoming one of the highest tallies outside China, the epicentre of the outbreak.

Singapore raised its "Disease Outbreak Response System Condition" to orange last week - which means the disease is severe and spreads easily from person to person.

Building management staff conduct temperature screenings of visitors and tenants of a building in the financial district of Singapore on February 10, 2020.