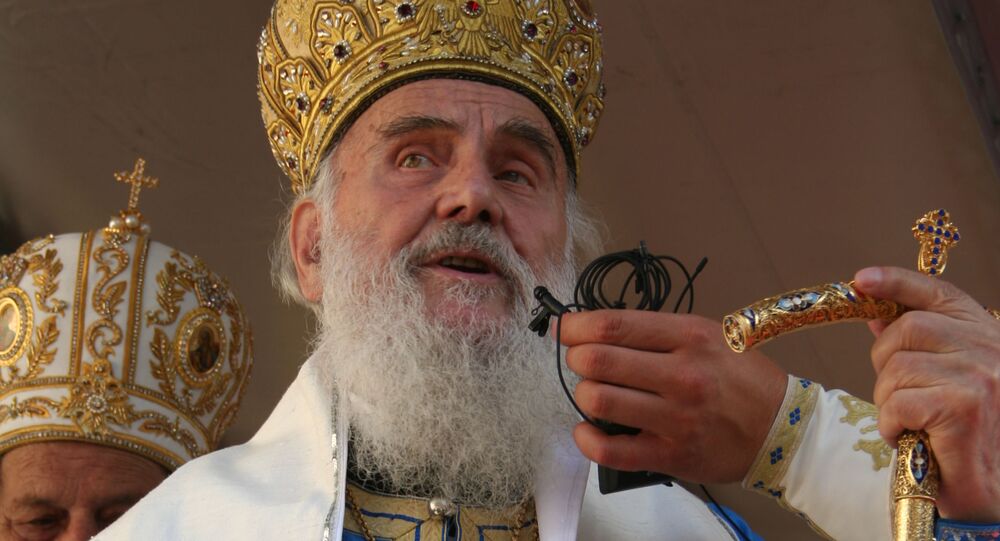 He had tested positive after attending the November 1 funeral of Metropolitan Amfilohije, the Serbian Orthodox Church's senior cleric in Montenegro, who also died from COVID-19.

Two giant screens were installed outside the Church of Saint Sava, the biggest Orthodox temple in the Balkans, so that the faithful can follow the ceremony, after which the patriarch's body will be laid to rest in the crypt.

Since Amfilohije's death, and the hospitalization of the patriarch, Serbian priests have started to appeal for their parishioners to take the deadly virus seriously. They had previously downplayed the threat from the global pandemic.

The total number of COVID-infected people since the beginning of the pandemic has nearly reached 98,000, with 1,081 deaths, according to the World Health Organisation (WHO). Vucic was among those who attended the funeral Sunday. 'People like you are never gone'.

Irinej (pictured seated at head of coffin) lead the funeral for Bishop Amfilohije in the Montenegrin capital Podgorica. Following the news of Irinej's death, Vucic posted on Instagram Friday: "It was an honor to have known you", alongside a black and white photo of the patriarch.

Born Miroslav Gavrilovic on August 27, 1930, Irinej was enthroned as the spiritual leader of Eastern Orthodox Serbs in 2010.

Protesters torch Guatemala’s Congress building amid unrest
As protests ramped up Saturday, he said on Twitter he was meeting with various sectors to analyze modifications to the budget. President Alejandro Giammattei pledged "the full force of the law" against people who vandalize public property.

Despite that, the socially conservative Patriarch was considered a relative moderate compared to some of the alternative candidates at that time. They included beliefs that the Serbs were historic victims of injustice and played on what were believed to be anti-Serb policies of rival Balkan nations as well as the worldwide community.

This was reflected in his relationships with other Orthodox Christian Churches, maintaining closer relations with Russian Federation and other Slavic allies and alienating himself and the Serbian Church from the Ecumenical Patriarchate of Constantinople.

However, he also insisted that the Church would oppose any deal reached between the Belgrade government and authorities in Kosovo, the former Serbian province that declared independence in 2008, if it confirmed Kosovo remaining outside Serbian territory.

Irinej was among the rare Serbian church dignitaries who openly called for improved ties with the Roman Catholic Church.

While church said the patriarch was "without symptoms" and in "excellent" condition, he developed a high fever and his health quickly deteriorated due to chronic heart issues.

The vast majority of Serbia's population of seven million identify themselves as Orthodox Christians, and the church is a major force in the Balkan country.

The Orthodox Churches split from the Vatican and the Roman Catholic Church in the 11th century in an event called the Great Schism.